“We tried to see (Kamalik), but the situation did not work, it cost us a lot and we did not gain anything, we do not want anymore.” With these words the two young men Abdullah (20 years old) and Rajab (19 years old), in an interview with Enab Baladi, expressed their desperation to issue “Kamlik” (Temporary Protection Card) after trying for months and pays large sums in vain.

Some Syrians seeking to extract “kemalak” in Turkey by legal means enter a cycle of challenges that prevent them from extracting it, and the reason is the complexities and contradictory orders, it may even go as far as discriminatory “racist” behavior for some employees. , according to what Enab Baladi has ascertained from the evidence of legal sources.

This spiral is associated with the payment of amounts that burden them, exceed their financial means or exhaust their savings and sometimes even leads to job loss because they spend a long time pursuing their papers in remote cities and regions.

The two young men working in a factory for the production of Arabic sweets in the Esenler district of Istanbul, the European section, went to the headquarters of the Department of Immigration for Foreigners in the Tuzla district, in the Asian district of Istanbul. concerned with the facilitation of Syrian transactions and documents relating to “temporary protection.”

The two young men were stripped of their fingerprints to get “kemlak” and given a letter with the identification number, which is the national identification number starting with “99”. They were asked to go to the state of Elâzığ in eastern Turkey, to complete the extraction of “kemluk” from him.

The two young men handed their letters to an employee of the Foreigners Section of the Immigration Department in the state of Elazig, which is 1210 kilometers from Istanbul (about 13 hours drive). The employee asked them to come and sign the letters. once a week. for two months until they receive a “temporary protection” card.

In the third week, which coincided with December 2021, the employee gave them a new date that lasted for about two months, authorizing them to take “Kamlik”.

The two young men returned to the foreign division in Elazig at the appointed time, so the division officer took their meeting and gave them a new meeting after another two months.

Two months later, the two young men went from Istanbul to Elazig, to their surprise, on April 11, when they were not given a “temporary protection” card due to the state’s inability to give “kamlak” to Syrians. .

Young Abdullah called “157”, a number assigned by the Immigration Department to answer complaints and questions from foreigners living in Turkey all the time and in several languages, to ask him to review the Department of Immigration for Foreigners in the Tuzla region.

The two young men went to the Tuzla area and entered the center after waiting four hours in a row hundreds of meters. The answer was from an employee inside that the center only gives a transfer or visa to get “Kamlik. Once, and asked them to review the previous city, which is Elazig.

The two young men returned to the Foreigners Division in Elazig and the answer was to return to Tuzla and transfer to another state, as Elazig no longer gives the temporary card to the Syrians.

The two young men returned disappointed after the hardships, difficulties and costs of travel and work stoppage during this period and each of them had to pay around 7500 Turkish lira, travel expenses, a house contract and open bills for the house in the country. tire. name in Elazig, in addition to the interruption of work, so coming every week to Elazig paid the owner of Labor to give them up in the first two weeks.

It took two days to travel, in addition to the work stoppage for the third day due to travel difficulties, as the two young men traveled between Elazig and Istanbul more than once by private transport, forcing them to pay a much higher greater than the cost of public transport.

For his part, Ghazwan (24 years old), a young Syrian who works in a restaurant in Istanbul and has lived in Turkey for two years, told Enab Baladiu that he had to pay for his work for about five months to was issued as “. king” by the state of Niğde, which is about 750 kilometers away from his place of work in Istanbul (nine hours drive approximately).

The young man went during the period of periodic issuance of the “whip” every week to sign letters proving that he resided in the city of Nida, using private transport and issuing identification cards giving him the right to receive a “king” from a electrical energy. invoice and a residential address, which constituted a financial burden for him.

The young man has spent more than 14 thousand Turkish lira to get the papers and despite the cost he has paid, his presence abroad “Kamalak” is illegal, as he does not have a work permit, which he asked to issue, but has been rejected. “Because it had not been six months since he was given the card.” temporary protection.

Lack of censorship and “racism”

Syrian refugee rights activist Taha Ghazi explained to Enab Baladi that the case of not being able to get a “king”, despite having a transfer from Tuzla to other countries, is not individual, but has been repeated. until it has become a semi-public process.

Ghazi attributed the recurrence of such cases to the contradiction in the policy of the Immigration Presidency in the management of the asylum file during the last period, despite the fact that anyone receiving a transfer from the center located in the Tuzla region could receive a “king From the state he was going to.

The lack of oversight creates a state of confusion that makes the Syrian who wants to produce “like a king” live in a state of loss, according to human rights defender Ghazi, as he believes the issue is also based on an implicit methodology. in some immigration centers of some employees, who stay behind the facilitation of the work of Syrian refugees related to the temporary protection card.

The activist was surprised by the behavior of some immigration officials, as those employees who are in contact with Syrians, in foreign divisions, immigration departments and deportation centers, are supposed to be aware of the “racism” that Syrians suffer. 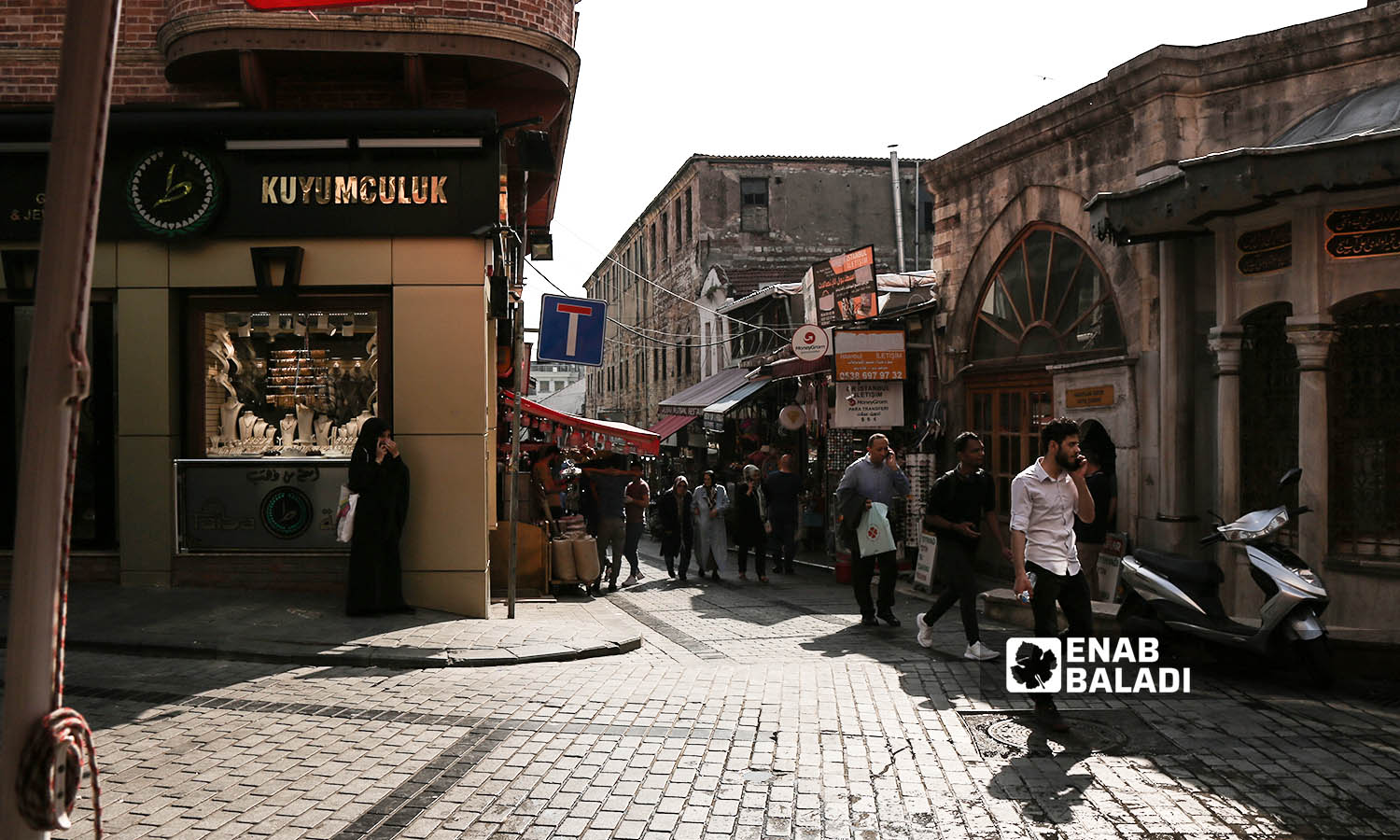 Near the Foreigners Division in the Al-Fateh district of Istanbul – May 27, 2022 (Enab Baladi)

No representation for Syrians

Human rights defender Ghazi explained that the Syrian in Turkey needs legal force and support from organizations and bodies, and most importantly to hold accountable a party that has wronged the Syrians, a strong Syrian presence or a political party. representing the Syrians. and lies in their legal requirements and needs, and the absence of the Syrian side weakens the issue vis-.-vis the other side.

Ghazi also believes that the lack of role of the political bodies representing the Syrians in Turkey, which have undertaken to stand by the Syrians, is a “catastrophe” for the Syrians and a “betrayal of the revolution” after 11 years of sacrifice.

Ghazi called on all Syrians exposed to such cases not to have their applications or documents processed by the Immigration Department, despite the legality and completeness of their documents, and to turn to humanitarian and human rights organizations. human rights and Turkish human rights bodies.

Many Syrian human rights and political organizations and bodies are active in Turkey, which are subject to many accusations and criticisms, including their lack of role and ineffectiveness in the face of numerous decisions and procedures ranging from the issuance of travel permits. , new conditions for tourists. residence and not giving them to newcomers, until the card is frozen. ” Temporary Protection ”(Kamalak).

Three million 763,447 Syrian refugees reside in Turkey, according to the latest statistics from the General Directorate of Turkish Migration Management, as of May 19th.

Turkish Interior Minister Suleiman Soylu said in a televised interview on March 22 that “as a result of studies conducted by law enforcement officers, it was decided that 80% of refugees live at the addresses they specified and the campaign. continues to reach an average of 90%. ” Soylu indicated that between 120,000 and 130,000 Syrians were not found at their addresses during this campaign.

On May 3, Turkish President Recep Tayyip Erdogan announced the Turkish government’s efforts to prepare a project to ensure the “voluntary” return of one million Syrian refugees to their country, according to what was reported by the channel.A Haber“Turkish.

Erdogan’s statements came via video call, during the handover ceremony of the keys to the “brick” houses in the city of Idlib, in coordination with the Disaster and Emergency Management Authority (AFAD) and in the presence of the Turkish Interior Minister. He said the Turkish government, in co-operation with Turkish and international civil society organizations, is seeking to establish a Full Housing and Service project.

According to the Turkish Interior Minister, on May 20, the number of Syrian refugees “voluntarily returning” to their country has so far reached about 500,000. Volunteers, starting from 400 to 500 people per week, according to “Anadolu”. Agency.

Soylu reported that his country’s authorities had deported 19,336 Syrian refugees since 2016 for security reasons.