The prison sentence for 4 citizens who protested against the parliamentary election law reopened the file of human rights violations in Qatar.

The opening of the violation file came after the defendants and their families confirmed the “politicization of the court decision” issued against them and that it was issued on the basis of “higher directives”, they said.

Also, Qatari citizens, who said they had been subjected to human rights and security violations, republished what they had been exposed to by Qatari authorities following the recent ruling, to remind them of what they were facing.

Among the most prominent complaints and accusations made by Qataris against the regime are what they said are accusations of politicizing the judiciary, issuing decisions under direct instructions, banning travel, revoking citizenship and threatening to withdraw it, and imposing restrictions on freedom of thought and expression. .

Many Qataris documented their complaints by posting videos to confirm their credibility or official documents confirming what they are exposed to.

Activists circulated the text of the decision against the four Qataris on the communication sites, amid an interruption by the Qatari authorities, which did not officially confirm or deny the authenticity of the circulated document.

The two convicted Qatari lawyers have been in custody since last August, while two poets, Ibn al-Dhib and Ibn Fetais, were sentenced in absentia because they were abroad.

Following the ruling, Muhammad Ibn al-Dhib released a video clip in which he dismissed the verdict and the allegations it contained, which he described as “false and defamatory” and questioned the integrity of the judiciary in his country, noted that the judgment was rendered by a corrupt judge.

He showed that he became the first poet in history to be sentenced twice to life imprisonment and that whoever was convicted the first time is a corrupt judge, and in the second a judge has been corrupted and that he who gave the Order in two trials is the same person, without mentioning his name.

Ibn al-Dhib attacked the Qatari channel, Al-Jazeera, and its most prominent media professionals, for ignoring the words about the decision, while claiming to protect freedom of expression.

Ibn al-Dhib had previously been sentenced to life imprisonment in 2012, for a poem in which he was accused of incitement against the regime, and after appealing the verdict, the Court of Cassation sentenced him to 15 years in prison instead of 25., and he was subsequently released from prison in 2016 with an apology from Emir Sheikh Tamim bin Hamad.

On the other hand, an account bearing the name of Saleh Abu Sherida, who said he is the brother of life-sentenced lawyers Hazaa and Rashid Abu Sherida, published allegations that call into question the impartiality of the decision.

The text of the ruling circulating on social media included the names of a number of witnesses against his brothers, but Saleh confirmed that only one witness appeared during the trial and gave a written testimony, expressing his surprise that the court took him.

He said: “The number of witnesses against my brothers in the judgment. We did not see any of them in court. Only one of them came and showed his testimony from his pocket. The judge told the clerk:” Register with you. that his testimony is implied. “What happened and judged my brothers forever. God suffices me and He is the best agent.” 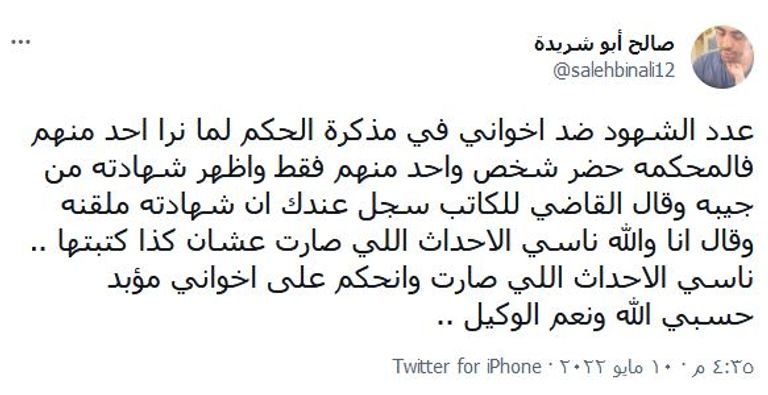 On March 30, Amnesty International issued a statement calling for the immediate release of Qatari lawyers.

And Qatari tweets have repeatedly criticized Al-Jazeera for ignoring everything related to Qatari issues and their demands, while claiming to protect freedom of thought anywhere in the world except Qatar.

In a statement, Amnesty said: “After protests to express dissatisfaction with the Shura Council’s latest electoral system law, which discriminates against individuals belonging to the Al Murra tribe, Qatari lawyers and brothers Hazza and Rashid bin Ali Abu “Sherida Al-Marri has been in solitary confinement since their arbitrary arrest in August 2021. Their imprisonment constitutes torture or other cruel, inhuman or degrading treatment or punishment and they should be released immediately.”

Last August, Qatar witnessed protests by the Al-Murra tribe against laws governing the parliamentary elections that took place last October, describing them as racist after depriving members of the tribe of the right to run for office.

The election raised tribal sentiment as some members of the Al Murra tribe found themselves unfit to vote, under a law restricting voting to Qataris whose families were present in the country before 1930.

During those protests, Al Jazeera came under fire for ignoring the protests that took place in the country in August, renewed these days after ignoring words about the decision.

Qatari human rights activist Abdullah bin Ahmed Bumater Al-Mohannadi posted a post on Twitter on the same day as the sentencing of four Qataris two days ago, highlighting his suffering and banning him from traveling since 2013 .

And he indicated that he was threatened with revocation of citizenship and travel ban without knowing the reason, as well as republished a copy of a request he submitted to the Public Prosecutor’s Office requesting the lifting of the travel ban, stating that no one responds to him . 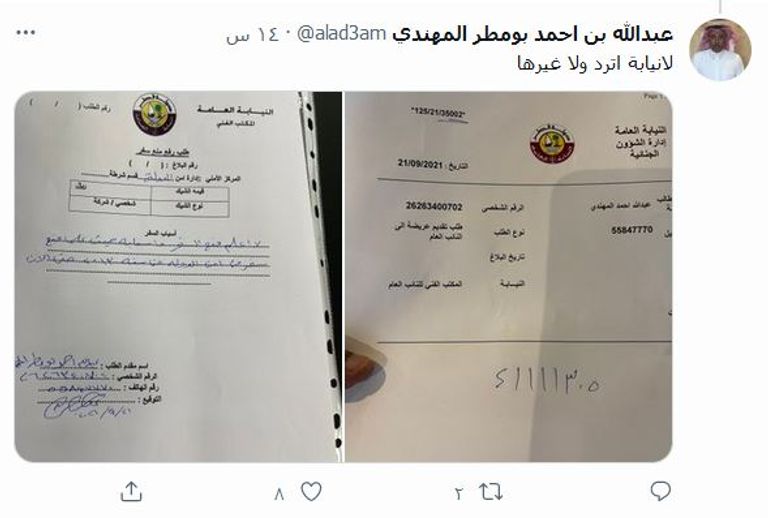 Qatari authorities continue to prevent a group of citizens from traveling, a ban that human rights institutions have described as arbitrary, especially as it is implemented without clear and public legal procedures and without charges and trials.

Saud bin Khalifa bin Ahmed Al Abdulrahman Al Thani posted a video clip on his Twitter account, complaining that he had been banned from traveling by decision of the former Interior Minister and called on the Prince to lift the travel ban. 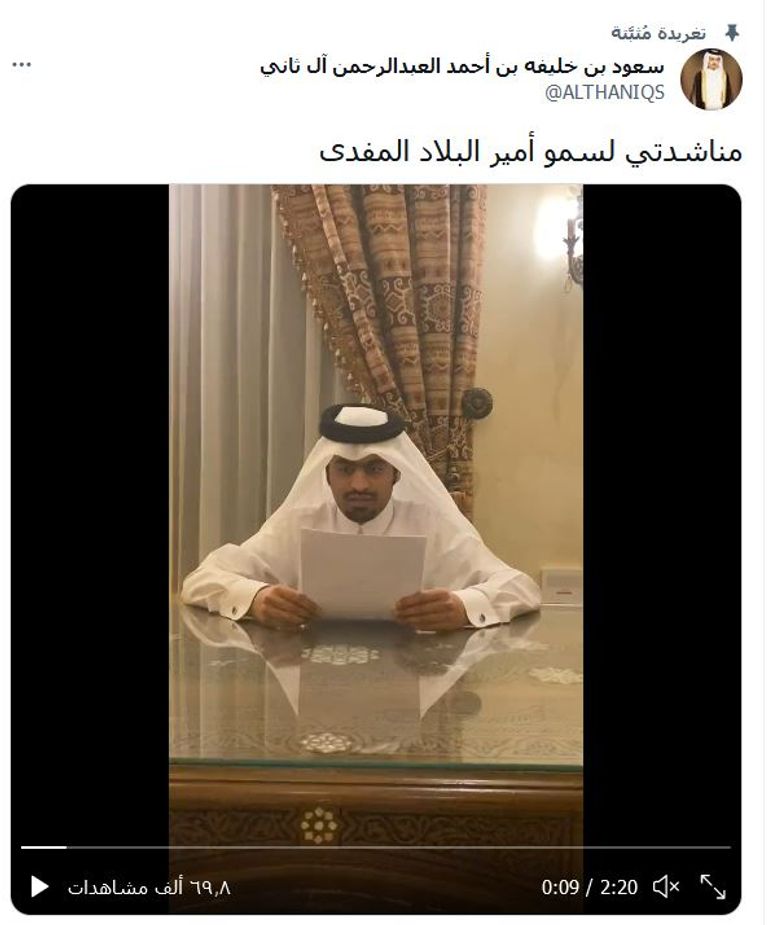 Also among the salient violations to which Qatar is subject under supreme orders, Issa Al-Shammari released a video clip documenting his complaint of revocation of citizenship.

And he indicated that his passport and identity card had been withdrawn since 2014, even though he was a “Qatari bin Qatari”. 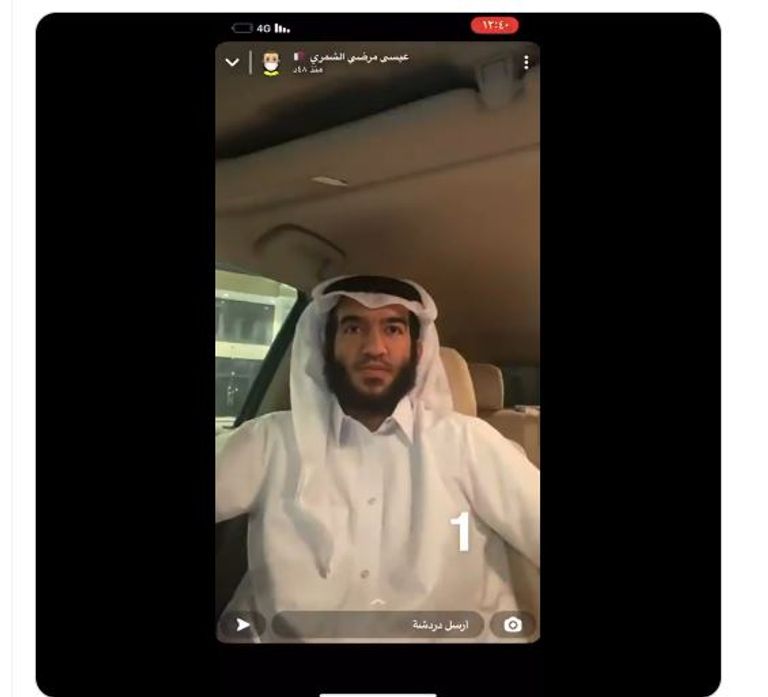 And he showed that from then until today he has tried to find out the reason for this and the answer to him has been that they were orders “from above”.

And he wrote on Twitter: “8 years with a passport and ID card issued, 8 years every time we go to a place they say from above and no one knows why (why) 8 years we go up and all my work breaks down from above, “Where are we above Mandri? From above.” 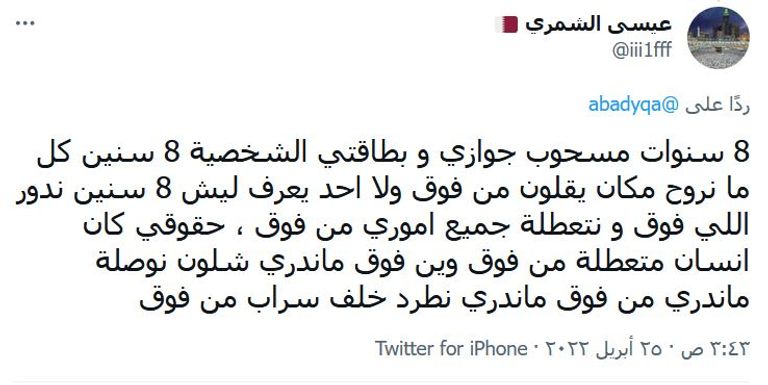 The issue of protests against the election law once again shed light on the file of revoking the citizenship of the Al-Ghufran tribe.

Qatari authorities have practiced systematic violations against members of the Ghufran tribe since 1996, including relocation, revocation of citizenship, expulsion of their children from school, deprivation of education, and ban on practicing it. their civil rights, forced eviction. and large-scale population displacement.

The Al-Ghufran tribe, one of the main branches of the Al-Murra clan, which makes up – according to the latest statistics – between 50% and 60% of the people of Qatar.

The Al-Murra clan had rejected the coup of Hamad, the former emir of Qatar and the father of the current emir, against his father to take power in 1995, who exposed members and personalities of the tribe to abuse, withdrew their nationalities and drove them away. from the country to other countries like Saudi Arabia, where members of the Al-Ghufran tribe are spread in areas located along the borders of the two countries.

And repeatedly over the last period, members of the tribe have called on human rights organizations and the United Nations to help them meet some urgent demands, the main one of which is the restoration of citizenship, the correction of conditions of members of the Al-Ghufran tribe, return. deportees in their work, reuniting families and retroactively restoring rights and benefits.